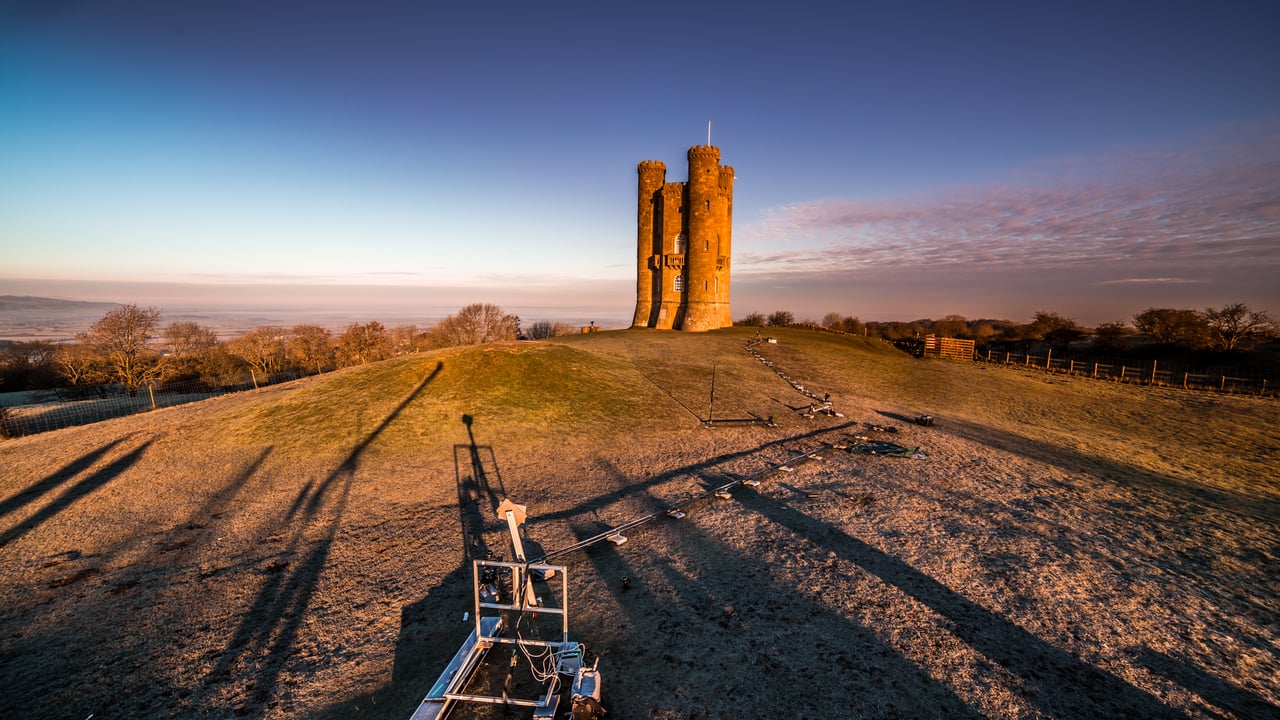 “Last year was a hell of a year! I had many amazing opportunities and managed to cram in no less than 32 countries! As always I’d like to thank each and every one of the production companies that hired me to shoot timelapse and keeping me doing what I love for a living!

For more information and behind the scenes of the ‘intro’ shot, take a look here: chadchud.co.uk/blog/2016/1/20/creating-a-monster-24hrs-at-broadway-tower

For the past few years there’s been a lot of ‘in my bag’ posts where photographers list or take a picture of their kit.  For me that would be a challenge in itself as most of my kit is big bits of metal or just too long to fit into your average picture.

Instead of a normal picture, I decided last year to show some of my kit in action on my 2014 showreel as a kind of mini intro to the video.  For this year’s reel, I wanted to go big…

I wanted to avoid the ‘classic’ timelapse shot of rolling clouds and a 20 minute shoot so the first plan of action was to try and get a shot over at least ten hours, showcasing all of my kit and all fitting within around thirty seconds.  The first thought I had was to layer all of my kit in a field and shoot it in action but you wouldn’t have seen what the camera was seeing.

After many morning coffees, I decided the best Idea was to shoot with each rig individually but then jump back to a camera behind it to shoot that rig and it’s own manoeuvre.  I’d already cut my reel together and had left a gap at the front for the intro so all I had to do was work out how many shots I required and where they would go.

Finding a location out of thin air is difficult.  I’d not shot many astro or night time scenes last year so wanted some starry skies for the intro.  This doesn’t leave many options as although there are a lot of dark sky areas in the UK, I needed a location I could get to quickly from London, with easy access from a road for unloading all of the kit.

Carrying kit to location was a top priority as the longer we had to travel backwards and forwards to the van, the longer the day would become and the more people I would have to hire ultimately leading to a bigger budget.  As it was a self funded project, I wanted to keep my ambition and desire under control!

Having typed ‘startrail uk’ into google image search, it eventually led me to a shot of Broadway Tower in Worcestershire.  I immediately knew this is where I wanted to shoot as it had relatively dark skies with no light pollution, was only a couple of hours drive away and most importantly, had nearby road access! After a few emails, permission was granted and we could go ahead!

I couldn’t find time to take a look at the location so as far as setting up each rig was concerned, I had to improvise.  One thing I could plan for however was the weather and timings for each rig.

I kept an eye on the weather looking for clearish skies and once the opportunity popped up, I set out my master plan which was a slight headache, but achievable.  I wanted to sync each shot with changes in the music so I jumped into Adobe Premiere and worked out how many frames each shot would be.

I wanted a little overlap towards the end of each shot into the next so you could see the kit in action so I added a few frames to the final shot as well.  I then worked out timings and as you can see from the picture above, we’d be shooting continuously for nearly 18hrs!

Add into this the fact that we had to travel to and from location and rigging time, it would end up being a 28hr shoot – I was going to need some help…

Luckily I chose winter to shoot this and it was a mild -4C – the perfect weather to be stood around for 18hrs!  Pain doesn’t really define what we went through as nobody really makes any clothes to be stood around in.  At one point, whilst triggering the pixelstick animation for four hours, I could feel my left foot go numb followed by my left leg and then no feeling from the hip down even though I was wearing four pairs of trousers!

Regardless of the pain though, I was there for my passion and we struggled on.  We’d rigged the kit between 11am and 3pm so it was ready to shoot and I didn’t want head torches illuminating the shot later on.  The only problem with this was that there was a slow build up of ice on EVERYTHING.  I’d rigged Dew Heaters on all nine cameras but that only kept the cameras warm.  There were some technical issues with kit a number of times but we managed to overcome them.

To help me out (carrrying kit around, rigging and holding my lack-of-sleep insanity at bay) were three camera assistants (Rob Myler, Nathan Waters and Sean Webb) and two runners (Jake Williams and Andy Barham).  Rob’s been my assistant for a few years now and a big shout out to him for not only helping me prep a huge amount of kit until the early hours, but also for sticking out 28hrs with me!  Also big love to Nathan who turned up to load and also keep (nearly) awake for 28hrs 😉

I planned on trying to get some sleep, even if only for 30 minutes or so but this didn’t happen as I’d invested a lot of time and energy into this shoot for it not to go how I wanted so fuelled by love, I managed to just about survive for the duration and cold.  On a technical level, it was the biggest shoot I’ve undertaken as far as location shoots go and it was certainly a challenge both physically and in complication!

What kind of Kit does it take to create this? 1300Kg of kit! Here’s each rig broken down, some off the shelf, some self-built:

6) The Windmill (Self Built)